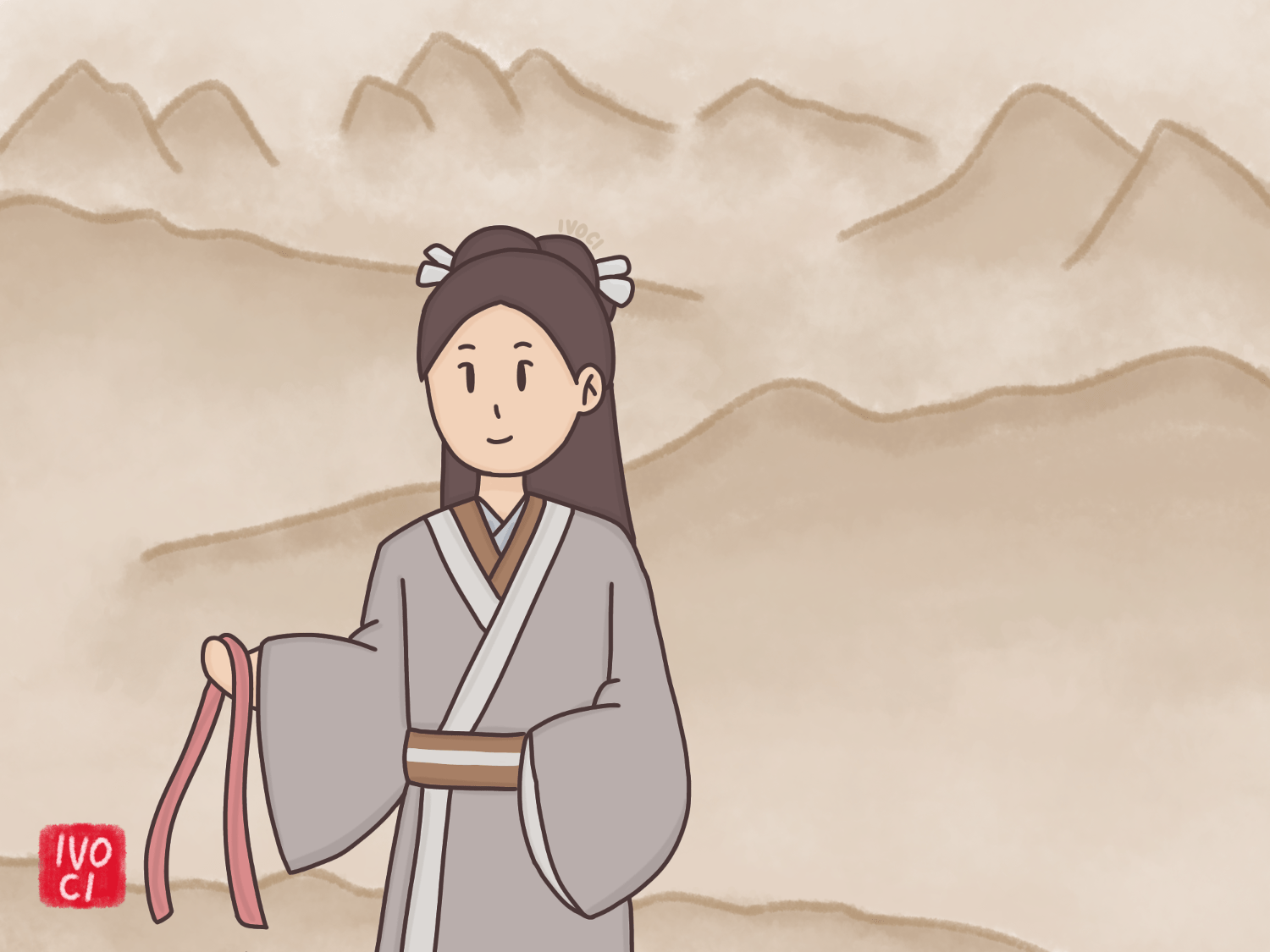 Collars in Hanfu come in various forms, including jiaoling (cross collar, front overlap collar that closes on the right or left side), dui-jin, yuanling, tanling, etc.

Some forms of the collar originated in China while others have been adopted from the Hufu of other non-Han Chinese ethnic minorities and/or from clothing worn by foreigners.

Types of collars on hanfu that are often encountered:

Jiaoling youren (Chinese: 交领右衽 ; Pinyin: jiāo lǐng yòu rèn) is a cross collar that overlaps at the front and closes on the right side following the youren rule (Chinese: 右衽 ; pinyin: yòu rèn).

They can also be described as cross-collar garments that are close to the right, or y-shaped collars because the collar looks similar to the letter y of the alphabet.

Jiaoling youren began to be used during the Shang dynasty in China. This collar shape eventually became one of the main symbols of the Sino Kingdom and eventually spread throughout Asia. 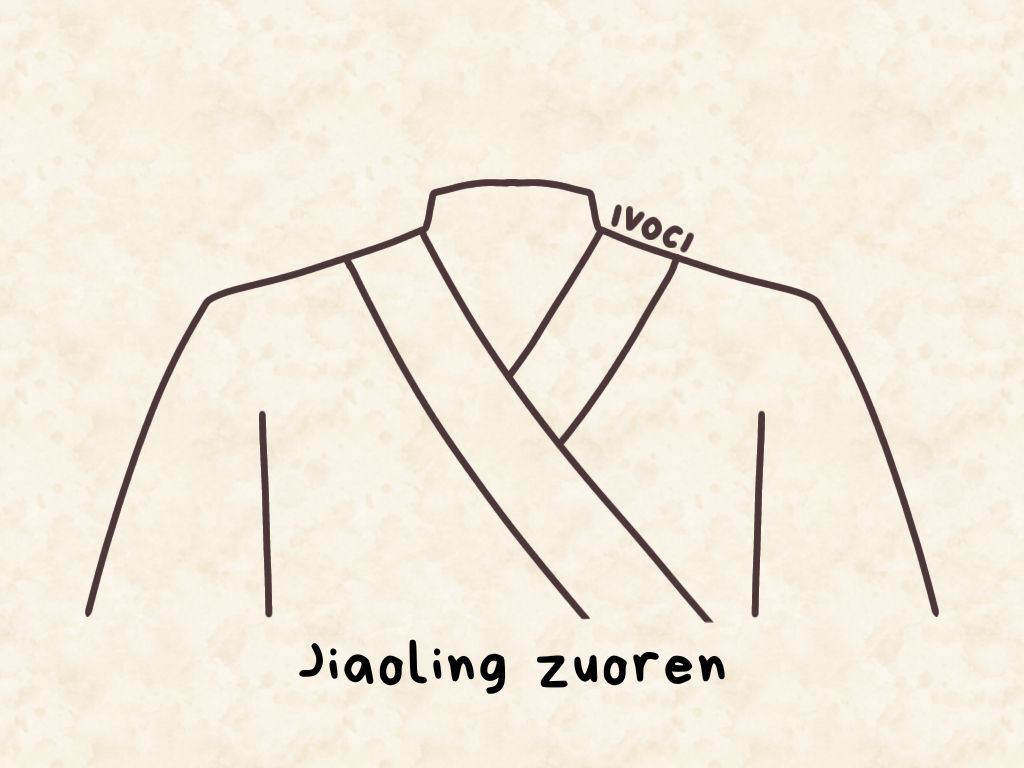 Jiaoling zuoren (Chinese: 交领左衽 ; pinyin: jiāo lǐng zuǒ rèn) refers to a cross collar that closes on the left side, not on the right side. 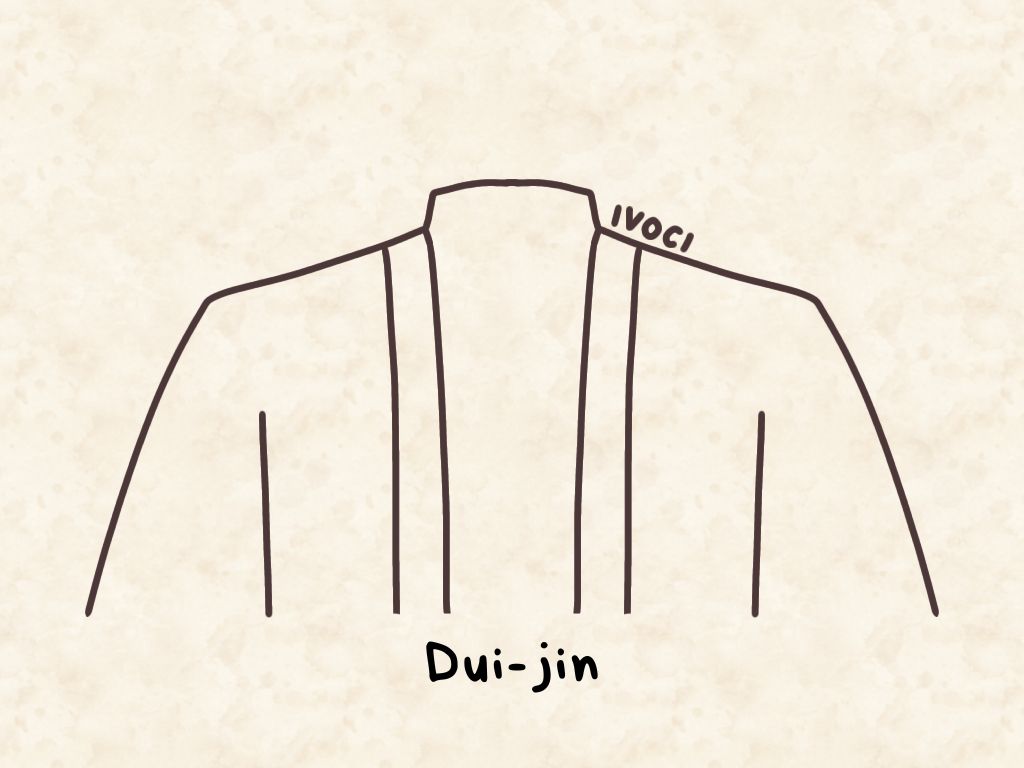 A collar that is parallel and straight at the front is called a dui-jin (Chinese: 对襟 ; pinyin: duì jīn).

Clothing with duijin collars can be closed in the center of the front or left open in the front.

They can be found with or without a high collar depending on the period.

Duijin can be used in clothing, such as beizi, banbi, beixin. 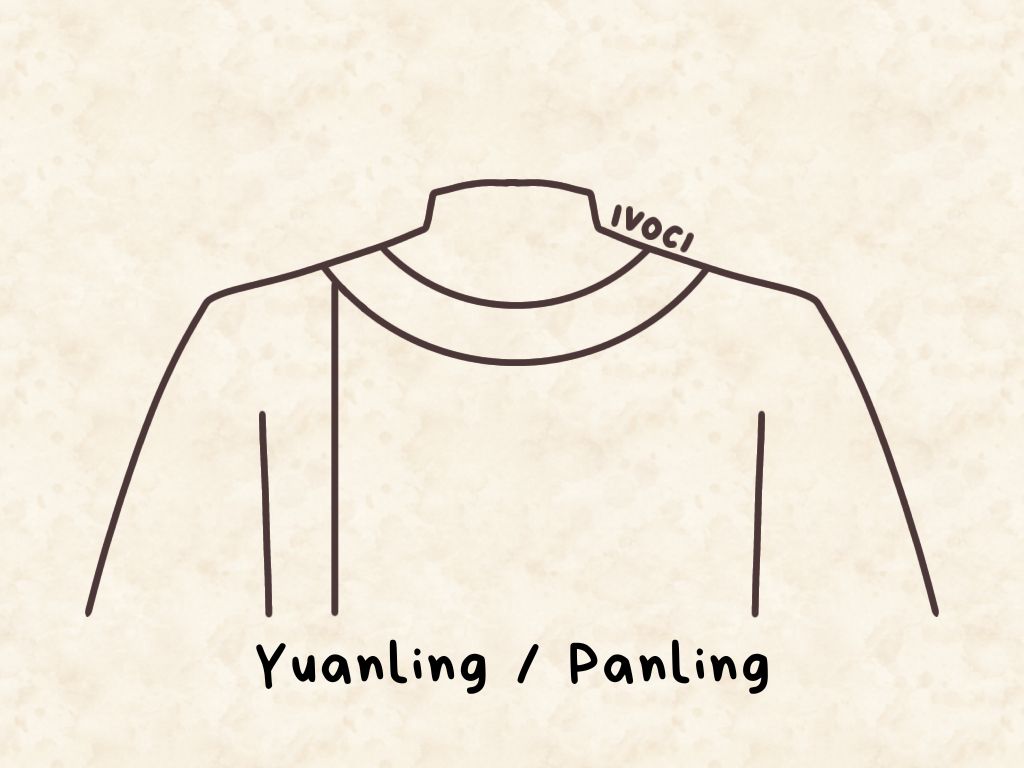 In ancient China, clothes with round collars were usually introduced and/or influenced by foreign ethnicities, such as Donghu, Wuhu, and foreigners from Central Asia.

Yuanling can overlap to the right or close in front in a duijin manner. 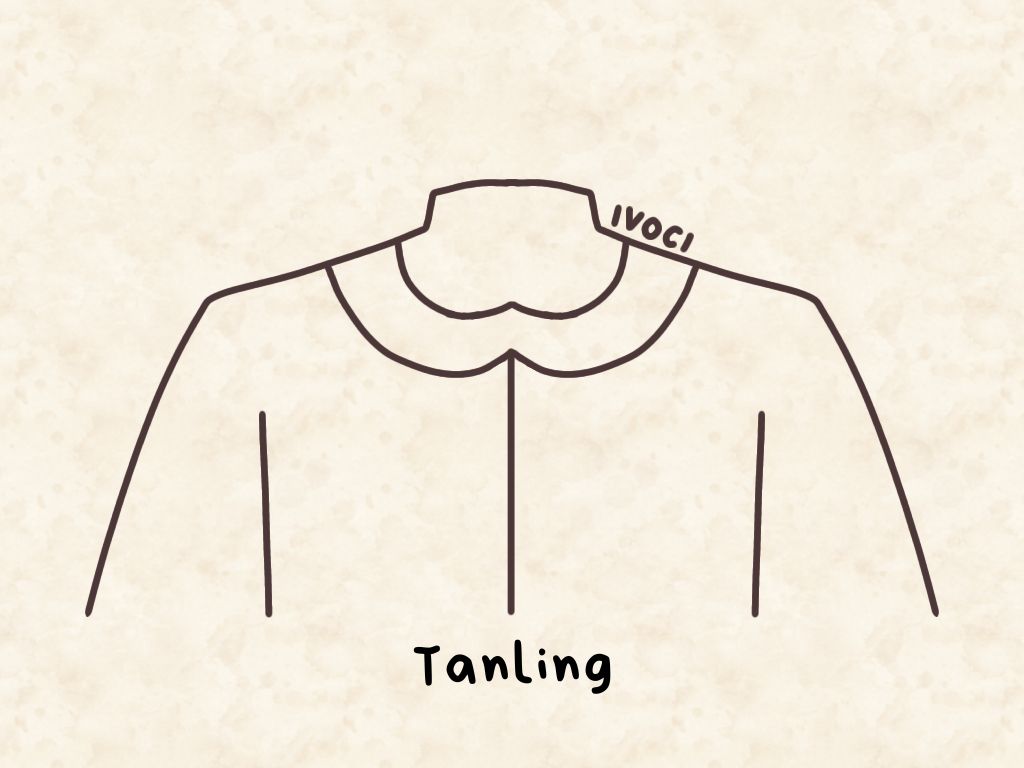 A U-shaped collar is a collar exclusive to feminine hanfu that was particularly popular in the Tang dynasty with short outerwear and tops.

Square collars (Chinese: 方领 ; Pinyin: fāng lǐng) are very similar to round collars, except that they are square.

This type of collar is commonly found in Ming dynasty clothing.

The shape of the collar is not too wide, and is almost always duijin and clamped at the front. 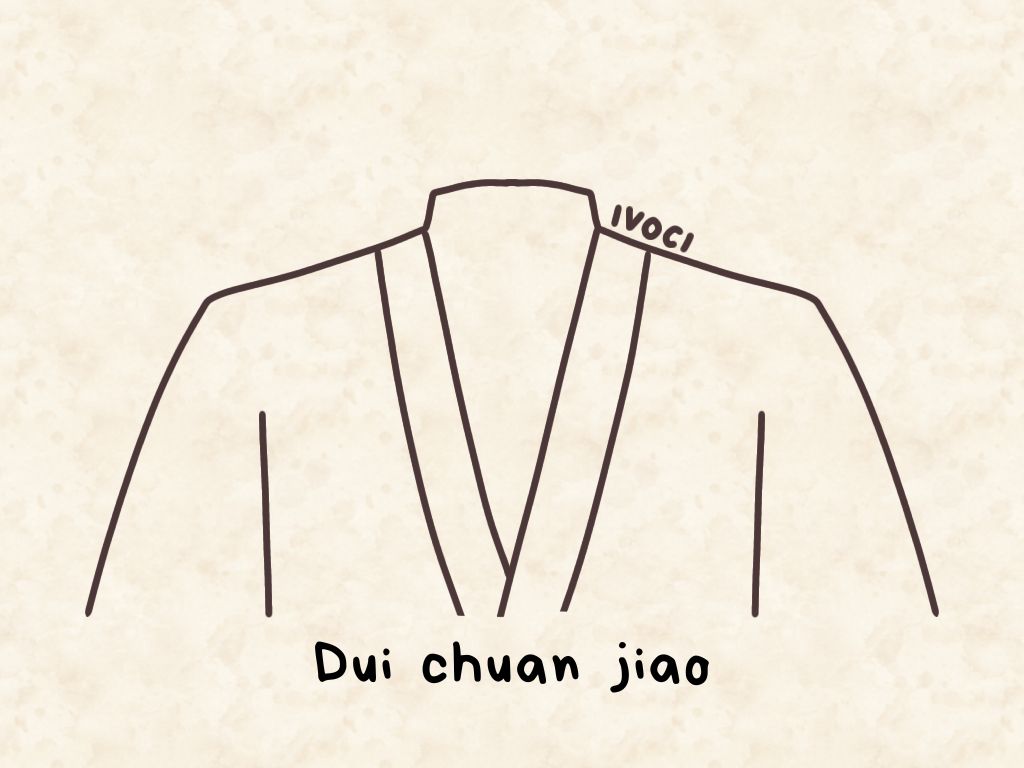 Cross-worn collar (Chinese: 对穿交 ; Pinyin: duì chuān jiāo) is a parallel or straight collar that is crossed in an X shape across the front of the body. Similar to jiaoling.

This collar is usually seen on women’s clothing of the Song Dynasty and produces the appearance of a very low cross collar at the front of the body.

This collar is usually only used for the outer layer. 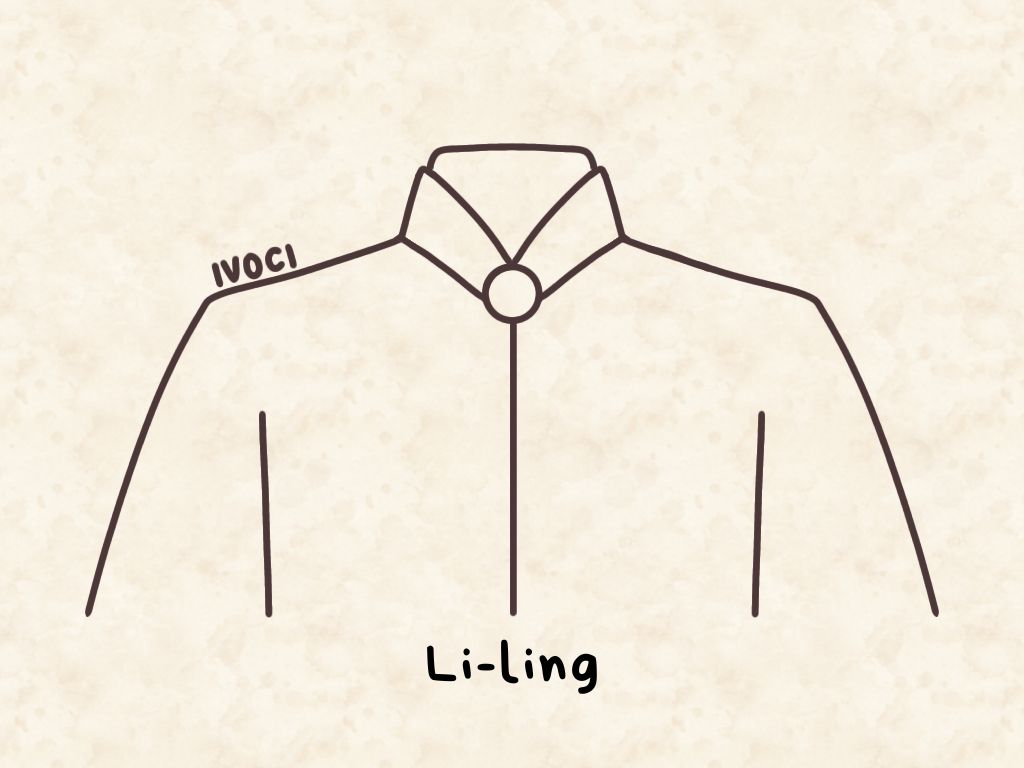 This collar is usually equipped with a metal button, so this type of clothing is also known as a “button jacket”.

This type of collar is often found in late Ming Dynasty clothing. 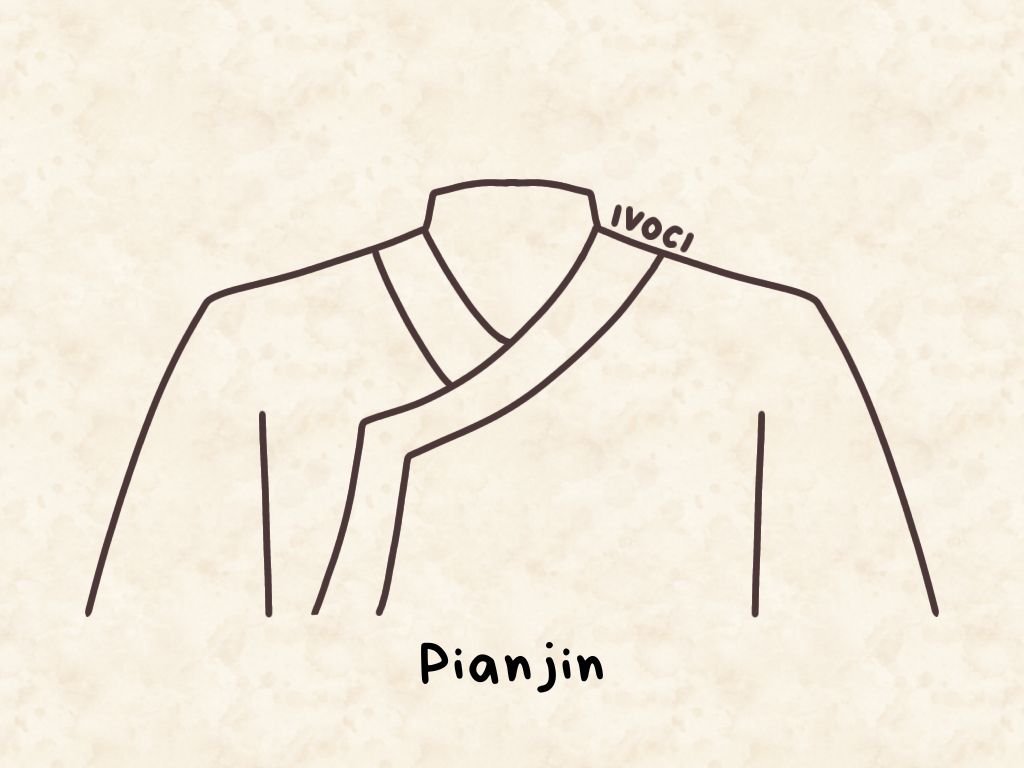 A pianjin (Chinese: 偏襟 ; pinyin: piān jīn), also called a pipa-shaped collar and sometimes referred to as a ‘slanted’ collar in English, is a form of collar that overlaps and closes to the right side by a large collar.

The shape of this collar is influenced by Manchu clothing. The Manchu front overlap opening was a Manchu innovation. Their clothes are closed with buttons at the center of the front of the neck, right clavicle, and under the right arm along the right seam.

The Manchu overlap is more like an S-curved overlap; it ran straight to the right from the center-front of the neck, descending into a blast before curving to the right side.

Manchu clothing rarely showed a high collar until the 20th century. The pipa-shaped collar was worn in the Qing dynasty and the Republic of China.

These pipe collars can be found without or with high collars, for example, mandarin collars.

This collar slopes down diagonally from the end of the standing collar to the wearer’s right, ending at the wearer’s armpit. Attached with buttons, clasps, or ties.

What is Wuxia Drama?